By students of Coláiste Cois Life

16 students are currently in Rustenburg, South Africa where they are taking part in a SERVE School Immersion Programme. These are their diary entries from Sunday 20th March until Tuesday 23rd March.

After having breakfast at 7:30am  we all got dressed for mass. We didn’t know what to expect but we had heard that it would be very long, since it was Palm Sunday. Chris O’Donoghue  and the Step up and Serve volunteers assured us that we would be entertained. Mass started at 10am with a procession around the street. The choirs were amazing. It was very exciting and surreal to see elderly women singing and dancing up the road. You definitely wouldn’t see the same in Ireland!

After two and half long hours we left, but all happy we were able to experience the different and exciting culture. After lunch, we set off on a hike up a nearby mountain. The walk was about two hours but when we got to the top it was definitely worth it because the view was astounding. Our first day in South Africa was a great success. However, we were all exhausted after a busy day and went straight to bed!

We all woke up slightly nervous knowing we were going to the squatter camps today. We were given the job of redecorating the Tsholofelo clinic in the Siza camp. Every 30 minutes a group was taken on a walking tour around the camp guided by the Step up and Serve volunteers, while the others stayed back and continued working on our nature inspired mural.

On our tours, we visited a man from Mozambique that has been living in Siza for eight years. We learned that he was unable to get any work because he was not a South African citizen and therefore struggled to make ends meet. We also learned that he can’t afford to return home to visit his family in Mozambique. Students from Colaiste Cois Life and Step up and Serve youth group gave the Tsholofelo clinic in Siza a face lift.

To our surprise, he told us he was happier living in Siza than at home in Mozambique because the living conditions were much better here. We couldn’t believe this as the houses in the squatter camps consisted of small one – room shacks with no running water. When we left the Mozambican man, we walked further into the camp and met a traditional healer (in South Africa, they are known as Sangoma’s). Chris put himself forward to be healed so we could see the process. It was one of the strangest experiences we have ever seen. The woman spoke to her ancestors and questioned Chris on different health problems that he might have. We found it very interesting to meet a traditional healer and to see the process.

We all found the tours interesting, shocking and some of the stories from the people we met were moving. After dinner Bishop Kevin Dowling came to give us a talk. The stories he told us about his life were fascinating and we all learned a lot about the apartheid. We then debriefed about what we had experienced that day.

Today, one group went back to the Siza camp to finish the mural on the clinic. We were all delighted with the finished piece as it was fresh and colourful. The second group went to Little Stars Early Learning Centre to do some maintenance work on the garden and playground area of the crèche. We also spent some time with the kids in the crèche playing games, singing nursery rhymes and having fun. We then went to a second crèche in Mpokono where the SERVE group from Coláiste Cois Life had previously worked three years ago. We painted the classrooms, the playground and spent some time with the children in the crèche. After dinner four members of the Tsholofelo board of governors and spoke to us as a group. They thanked us for our  fundraising efforts and told us to enjoy our time here. Maolusi then spoke to us about his home time Sesobe, where we will be spending the next two nights. The group are really looking forward to experiencing a different side of South Africa in this rural village. 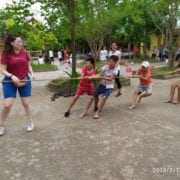 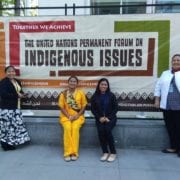 Shared Advocacy Campaign on HIV/AIDS in 2012

'New year, new me...but what about the others?'
0 replies

“A woman is the full circle, within her is the power to create, nurture and...