Today marks the end of our 4 weeks here in Sumanahali. Grudgingly we got on our ride back to NSK amidst hugs and tears from the patients at ‘Support’.  We began our last day in Sumanahali with an early start, going for morning mass at 7am. Being the last mass, I was made song leader and had to choose and sing hymns to accompany the procession, which I practiced for the previous night. Father Joji was heading the mass and mentioned that it would be the last day the 3 of us would be here and thanked us for all the work we have done. After mass, we headed to the clinic to open it for the last time. By this time we have gotten so used to dressing wounds that we set the clinic and run it ourselves, allowing Sr Fatimah to attend to other matters. Having met the patients every day, we knew most of them by name. Some of them were particularly clingy, particularly the younger ones Punett and Sheilpa who were sad we were leaving so soon. We were fortunate to see how Sheilpa’s condition has improved during our stay; she does not need to dress her wounds any longer as her previous wounds have closed up.

It is encouraging to learn how a project like this can actually improve the quality of life for these patients here and even better to see it for ourselves. After dressing the patients, I rushed off to join the St Joseph Sisters at the school, which I have grown quite attached to these few weeks. Sr. Shashintha, the school headmaster, gave me the opportunity to teach 10th standard for these few weeks and I have been taking them for maths and science. Currently the school is lacking a math and science teacher and Sr. Shashintha had been the replacement which was not ideal as she has other matters to attend to. Hence I ended being a teacher which I, to my surprise, enjoyed.

I arrived early at school to attempt to cover as much as I can and spend some time with the class. They were especially attentive today and I managed to finish more than I intended to and ended the session with puzzles and riddles. When it was time to say goodbye, they were ready with cards and gifts which they presented to me and made me promise to remember them. After many goodbyes I left them, some teary-eyed, to make my journey back.

Reflecting on everything we have seen and experienced, it has been a very eye opening experience and I daresay I am beginning to understand the social intricacies of the underprivileged. Although each placement is different, I believe each and every volunteer has dealt with similar problems with issues relating to the lower class. From my experience in Sumanahali, working with leprosy patients have broadened my knowledge and strengthened my desire to do medical work in impoverished countries. I have seen how medicine has helped these patients battle leprosy with the new MDT drugs and how the patients try to reverse the effects of leprosy. But more importantly, I have seen how society views leprosy. Along the streets in the city you could see lepers dragging themselves across the road in push carts to beg for money from the drivers whenever the cars stop. Festering wounds and amputated limbs are what they are, with flies feasting on their sores. Society does not bat an eyelid as it is such a common sight among the poor and the people were taught not to give them money as well, and rightfully so. Sr Christina told me that leprosy is seen as a curse from God, retribution for something done. Also, from archaic beliefs, leprosy is contagious and it is better to stay away from such people. It is these misbeliefs coupled with the nature of the disease that places these people in the lowest tier of the social ladder.

Last week, Ave Maria had lost a patient. He was sick for the previous week and passed away suddenly during the day. I rushed over from the school where I was teaching to bring him to the crematorium together with Sr Christina and some patients. There Sr Christina recounted the some moments spent with him and told me his heart wrenching story about his life. He had a wife and 2 children, which came as a shock to me as I did not expect any of these patients to have a family as nobody ever visits them. His family abandoned him when it was found that he had contracted leprosy, and yet they made sure they received the money he earns from a plot of land that he owns outside of the city. When he passed away, Sr Christina contacted his family to attend his funeral which they refused to even having a glimpse of him, except for his death certificate to acquire his title deed to his plot of land. It was the first time hearing such stories and it was difficult for me to understand the situation; how could his wife and children be so heartless? The sisters and the other patients were his only family he had, and they were the ones at his funeral. One of the patients did a simple Hindu ritual before cremating his body. It was difficult to watch even though I do not know him well, I wonder how difficult it must be for the sisters and patients who were with him for years.

Another memorable experience is visiting Echo, a rehabilitation centre for juvenile cases. They were boys who committed federal offences including rape and murder. We were reluctant to visit after hearing that but we eventually went to entertain them which turned out to be a good experience.Sr Pauline, the counsellor in Echo, told us that these boys come mostly from broken families, some with fathers who are criminals themselves. It highlights the realities of the underprivileged, how they are caught in a cycle of problems. Having spent most of my time in the school, St Joseph’s Convent School is also another outreach programme for the underprivileged. This school accepts children from all family backgrounds and offer them free education and free meals. Most of the children in the school are orphans or from single parent families. Without proper upbringing these children naturally lack the discipline to sit in their seats and teachers have a hard time controlling the class, especially since it is state law that they are not allowed to use physical methods. The worrying part is the lack of interest to study, leading to them failing 10th standard and exacerbating the poverty cycle. However after all that has been said, there are social aspects of India that are heartening to see and something that other countries can learn from as well. One such aspect is the sense of community. It does not matter if they know each other well, as long as a member in the same community experiences difficulties others will naturally help. People would congregate for the sake of community and put aside their differences just to have a meal together. The beautiful thing is that they do not believe in stepping over their friends just to get ahead. Family is very important to them. The locals greet each other by asking if they had eaten, followed by what exactly they ate. When they are familiar with someone a little longer they will ask about their family and right down to what their names are. They are genuinely interested in the lives of other people and want to know more about that person. This is what is lacking in fast paced societies where people are individualistic and forget that knowing oneself is just as important as knowing others.

To sum it up, these past 4 weeks in India has been a very fulfilling one. Although my work here is finished, my work for charity has just started. I would continue to do my part to SERVE but I believe the strongest force I can provide is my personal testimony and I hope it would inspire others to step forward and take on the responsibility to provide for the underprivileged, which is what we should be aiming for a better society for us all. 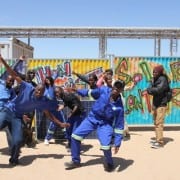